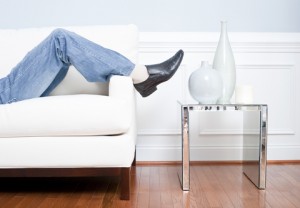 Your couch … that tried-and-true “friend,” the one that provides rest and solace from a long, hard day, and a soft, familiar place upon which to rest your weary head … is, in fact, the most dangerous piece of furniture in your home.

But the writing is already on the wall … the more you plant yourself on your couch, the sooner you’re likely to die. This sounds dramatic, but it’s disturbingly true, as research is pouring in showing that sitting is simply very bad for your health.

The average American spends up to 15.5 hours sitting every day,[i] and a great deal of this is likely done on your couch …

Certain cancers, including breast and colon, are heavily influenced by your level of physical activity, with your risk increasing the less active you are and the more sitting you do. It’s estimated that 173,000 cancers could be prevented each year if people sat less.[ii]

If you spend four or more hours planted on your couch watching TV, you have a 125 percent greater risk of a heart problem than people who spend less than two hours doing so.[iii]

Women who sit for long periods each day have higher insulin levels and higher amounts of C-reactive protein and other substances in their bloodstream indicating chronic inflammation.[iv] These are early signs that suggest type 2 diabetes may soon develop.

4. Muscle Imbalances and Back Pain

If you slouch or sit in an uncomfortable position, your muscles and ligaments can become overstretched, fatigued and strained. Sitting actually puts more pressure on your back than standing, and when done for long periods, especially in an improper position, it creates muscle imbalances that are at the root cause of many cases of back pain. The solution lies in addressing those original muscle imbalances, which is what the Lose the Back Pain system is designed specifically to do.

The more you sit, the more likely you are to be, well, miserable, as prolonged sitting is linked to mental strain and decreased mental well-being.[v]

The longer you sit, the shorter your lifespan is likely to be. Indeed, research shows that cutting back your sitting time to less than three hours a day on average would increase U.S. life expectancy by two years![vi] And, prolonged sitting is a risk factor for all-cause mortality, independent of physical activity, which means even if you exercise, if you sit on your couch a lot it could still cause you to die prematurely![vii]

If you spend 21 hours a week sitting on your couch in front of the TV, you’re 80 percent more likely to be obese than if you do so for five hours a week or less.[viii] This isn’t surprising, as your metabolic rate plummets when you sit (to close to where it is when you’re sleeping), and is far lower even than when you stand and shift your weight from side to side.

If you’ve fallen into the “couch-potato trap,” it’s time to get up and moving… and if you’re trying to shed unwanted pounds, you will get a GIANT boost from ThinMist,â„¢ which helps you slim down naturally even without making changes to your diet and exercise programs.

You simply take ThinMistâ„¢ three times each day by spraying it under your tongue, and as the 100% natural ingredients slowly build up in your system, your body NATURALLY begins releasing more youthful levels of human growth hormone (HGH), one of your body’s most powerful fat burners.

4 thoughts on “World's #1 Most Dangerous Piece of Furniture”