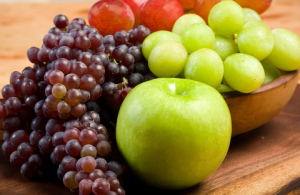 Whole fruit is an important source of antioxidants, vitamins, minerals and fiber – beneficial compounds that many Americans are lacking. Eating fruit has been linked to a number of health benefits, from lowering your risk of heart disease, stroke, type 2 diabetes and cancer to helping you lose weight and avoid obesity-related diseases.[i]

Yet some fruits are healthier than others … and some can be downright dangerous. Check out the most dangerous fruit list below to see if any of your favorites are on the list.

Apples are rich in antioxidants and anti-inflammatories shown to lower the risk of asthma and lung cancer, help with blood sugar regulation, and possibly lower your risk of macular degeneration and Alzheimer’s disease. They’re overall a healing fruit, but watch out for the seeds.

Apples also topped the Environmental Working Group’s (EWG) Dirty Dozen list, which is the produce most likely to be contaminated by pesticides. Of the apples they sampled, 99 percent tested positive for at least one pesticide residue.[iii]

“The testing turned up nine known or probable carcinogens, 24 suspected hormone disruptors, 11 neurotoxins, 12 developmental or reproductive toxins, and 19 honeybee toxins. Traces of fungicides captan and pyraclostrobin turned up on more than half of strawberry samples tested. Your best bet for right now? Stick with organic strawberries.”

Grapes also made EWG’s dirty dozen list, and 60 percent of grapes sampled tested had residues of neonicotinoid pesticides. Research suggests neonicotinoids may harm children’s brain development and they have been implicated in the collapse of honeybees and other pollinators.[v] When buying grapes, choose organic when possible.

This South American fruit has a delicious creamy flesh rich in fiber, potassium, vitamin C and B vitamins. But like many other fruits, its seeds must be avoided. Cherimoya seeds are so toxic, they’re crushed and used as insecticide. There are even reports of blindness occurring from the juice of crushed seeds coming into contact with the eyes, and ingesting too much could lead to dilated pupils, intense photophobia, vomiting, nausea and other symptoms.[vi]

Rhubarb is technically a vegetable, but I’ve included it on this list because it’s typically used as a fruit (in desserts, jam and the like). Rhubarb stalks are safe to eat, but the leaves of this plant are very poisonous. If you eat rhubarb leaves, it can cause vomiting and diarrhea, along with seizures, difficulty breathing, kidney problems, coma and even death due to the oxalic acid salts they contain.

Tomatoes, which are considered a fruit in most of the world, are full of beneficial antioxidants, like lycopene. But be sure to avoid the stems and leaves; they contain a poison called glycoalkaloid, which can lead to nervousness and stomach problems.

Ackee, the national fruit of Jamaica, can be quite healthy – but only when it’s ripe. When ackees are ready to eat, they open revealing yellow “brain-like” flesh and large black seeds. While the seeds are always toxic, the ripe flesh is a vitamin-packed staple food in Jamaica (typically eaten cooked with salt fish). However, unripe ackee contains a poison called hypoglycin, which can lead to Jamaican Vomiting Sickness, which can ultimately cause coma or death.[vii]

Next, Do NOT Let Them FOOL You Anymore! Discover the … 3 DIRTIEST Secrets Lurking in the Pain Relief Industry’s Closet of LIES

1 thought on “7 Dangerous Fruits to Beware of Most”