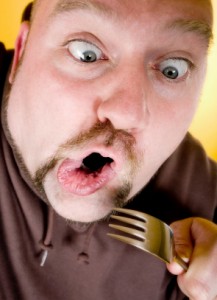 For the first time, more Americans than not read food labels the first time they buy a product,[i] a trend that undoubtedly reflects people’s increasing desire for healthy, “junk-free” food. But if you’re scanning the label only for information like calories, sugar and fat, you may be missing out on the most revealing information of all … the ingredients.

Hidden within the ingredients list on numerous processed foods are additives that really have no business being consumed. Food manufacturers use them to make foods more palatable and alluring (such as colors, emulsifiers, thickeners and texturizers), as well as to make them last longer and keep from spoiling (preservatives). In other words, food additives (the FDA maintains a list of food ingredients that is over 3,000 items strong) help food manufacturers sell more of their products while oftentimes saving money on costs … but what do they do for you?

In some cases, they put your health at risk. And this is why, if you see any of the seven food additives below listed on the back of a food package, you may want to swiftly put it back on the shelf. While many food additives are questionable, the seven below are downright nasty — think twice before eating these … your body deserves better.

1. BHA: Used as a preservative (most often to prevent fats and oils from becoming rancid), BHA (butylated hydroxy­­anisole) is “reasonably anticipated to be a human carcinogen” by the National Toxicology Program (NTP).[ii] Animal studies showed dietary exposure to BHA caused stomach cancer in mice and hamsters, and liver cancer in fish. Along with consuming BHA in foods like cereal, vegetable oil and potato chips, BHA is also used in cosmetics such as lipstick and eye shadow, and therefore may also be absorbed through your skin.

2. Potassium Bromate: This dough conditioner is widely used in white flour, bread, and other baked goods in the United States, even though it’s banned in most other countries, including Europe, Canada and China. Food manufacturers like it because it increases bread volume and texture, but this substance is known to cause cancer. Fortunately, most bromate breaks down during the baking process, but even the small amounts that remain could increase your cancer risk when consumed over a lifetime.

3. Propyl Gallate: Another preservative to keep fats and oils from going rancid, propyl gallate (which is often used in conjunction with BHA) is a hormone-mimicking chemical that has estrogen-like properties.[iii] Chemicals such as this, called “xenoestrogens,” have been linked to a number of health issues, including reducing sperm count and increasing the risk of breast cancer. Animal studies have also suggested that propyl gallate might cause cancer. Look for it in vegetable oil, chicken soup base, chewing gum, meat products and more.

4. Caramel Coloring (when produced with ammonia): The most widely used coloring added to foods and beverages such as colas, beer, pre-cooked meats, chocolate-flavored products and sauces (Worcestershire, soy, etc.), caramel coloring is often produced with ammonia and contains the contaminants 2-methylimidazole and 4-methylimidazole. These contaminants have caused cancer in animal studies and are listed as “possibly carcinogenic to humans” by the International Agency for Research on Cancer. Studies by the Center for Science in the Public Interest (CSPI) suggest that many soft drinks contain high levels of these contaminants (with even the least-contaminated brands coming in in excess of the FDA’s action limit for the chemicals).[iv]

5. Sodium Nitrite and Nitrate: Sodium nitrite and nitrate (which breaks down into nitrite) are added to processed meats like bacon, ham, hot dogs and lunch meat as a preservative, coloring (it gives meats a red color), and flavoring. However, these chemicals can lead to the formation of cancer-causing chemicals called nitrosamines, and research has linked consumption of processed meats that contain nitrite to several types of cancer.

6. Partially Hydrogenated Vegetable Oil: If you see this ingredient, liken it to a heart attack in a box … the process used to make this additive, which is found in margarine, crackers, fried foods, baked goods, microwave popcorn, frosting and more, creates synthetic trans fats. Trans fats have been linked to heart disease, heart attacks, diabetes, cancer, increased inflammation and more. Food manufacturers use hydrogenation because it increases the shelf life and flavor stability of foods, and makes fats and oil solid, even at room temperature. Health agencies state that there is no safe levels of trans fats to consume, but be aware that even if a label lists 0 grams of trans fats, it can legally contain up to half a gram per serving. So don’t depend on claims of “trans fat free” or “zero grams of trans fat” on labels — look for partially hydrogenated vegetable oil instead.

7. Aspartame: Widely used in diet and  “sugar-free” foods like diet soda, frozen desserts, gelatin desserts and more, aspartame (brand names Equal and NutraSweet) has been linked to cancer and neurological problems, including dizziness and hallucinations.[v]

Uh-Oh … Been Consuming These Nasty Additives for Years?

Don’t worry, take action instead by pledging to no longer purchase or consume the food products that contain these questionable additives. You can do this simply by consuming mostly fresh, unprocessed foods, but if you have a smartphone you can also take advantage of the numerous apps out there that help you make nutritional food choices. For instance, with the Fooducate app you can scan barcodes on food packages and a warning will pop up if it contains any controversial additives.

In addition to turning over a new leaf and boycotting those unhealthy additives… detox your body with Natural Cleanse.

2 thoughts on “The 7 Food Additives to Beware of MOST”