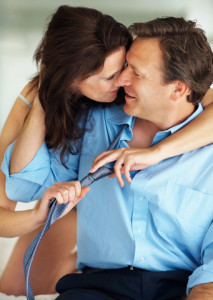 Many people with back pain avoid having sex for fear that it will cost them weeks or months of pain. In one study, 64 percent of those with chronic low back pain said sexual intercourse worsened their pain, while separate research showed up to 84 percent of men with low back pain have a reduction in sexual frequency as a result.[i]

And, contrary to popular belief, spooning may be far from the best position after all, according to a new study that actually tracked how 10 couples’ spines moved during five common sex positions.[ii]

So far, only recommendations for men have been released (female findings are expected to be published in the next few months), but the study set forth new ‘guidelines’ for men who are flexion-intolerant (such as if you have back pain when you touch your toes or sit for long periods).[iii]

For flexion-intolerant back pain, the ‘quadruped’ position (rear-entry, in which the female is in the quadruped position and the male is kneeling behind her, better known as ‘doggy-style’) is advised instead of spooning, and it’s recommended that men use a “hip-hinging motion instead of thrusting with their spines.”[iv]

Subtle changes in your partner’s posture can also have a significant impact on your pain, “which suggests that the partner may be an integral factor in the intervention.” In other words, one of the best ways to have an enjoyable sex life even if you have back pain is to discuss it with your partner. It’s not only those with back pain who are affected, either, as their partners may fear hurting them during sex. Together you can experiment to find positions that are pain-free and enjoyable for you both.

Another option that will come in handy… um, very handy … is the Back Ease, a spinal decompression device clinically proven to treat a wide range of chronic back problems.

One thing that makes is so handy is that, for many, the back pain starts after sex – sometimes minutes later and sometimes days later.

When this happens, you can hop on the Back Ease for quick relief. I’ve personally seen people hardly able to walk up to the Back Ease use it for just a few minutes and stand up feeling 90-100% relief from their back pain.

(I’ll leave it up to YOUR imagination to see other ways this exceptional back-saving device could be handy in regards to comfortable sex with back pain!)

Click Above to Learn More About The Back Ease!

Plus, because of what happens as your spine decompresses (nutrient-rich fluids are “sucked” into your discs, re-cushioning your discs with extra water, and relieving the pressure caused by gravity) … your back pain naturally fades away into the background … leaving you more energetic, happier and free to do the things you want to do, not what your back allows you to do, which is a definite bonus for your sex life.

Click here now to find out more about The Back Ease!

3 thoughts on “Best Position to Make Love If You Have a Bad Back (surprising!)”