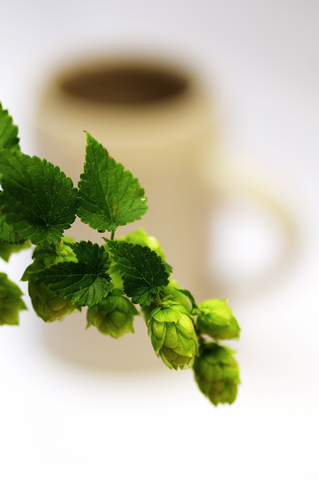 Hops are most known for their starring role in beer brewing, but did you know hops are actually a form of herbal medicine that’s been utilized since ancient times? It’s thought that hops originated in Egypt and as early as the first century A.D. hops were described as a “salad plant.”[i]

For you beer junkies, you might be interested to know that at one time “ale” described beer made from malt without hops while “beer” was only brewed using hops (this authentic beer is thought to have originated in Germany).[ii] Back in the day (as in, in the 1600s), hops were primarily used for preserving the beer, as hops contain antiseptics that prevent spoilage.

However, hops add a unique bitterness to beer along with different flavors, aromas and resin that increases foam — and it’s this flavor, aroma and bitterness that make them so popular among brewers today. It’s the flower of the hops plant (sometimes referred to as cones because they resemble pine cones) that is used in brewing. And if you think hops are a vine, you’d be mistaken. According to A Perfect Pint:[iii]

“Often referred to as a “vine”, hops are actually a “bine”, using a strong stem and stiff hairs to climb rather than tendrils and suckers to attach.”

Today Washington, Oregon and Idaho are the leading hop-producing states in the United States, with Washington, the lead producer, growing about 50 million pounds of hops a year.[iv]

Like most plants, hops contain various compounds that may provide therapeutic, health-boosting benefits. Among the most promising:

The hops constituents iso-alpha-acids and xanthohumol showed low-to-moderate anti-viral activity against several viruses, including cytomegalovirus, herpes, rhinovirus and more.[v] Research also shows that xanthohumol is an effective antiinfective agent against microorganisms including bacteria, viruses, fungi and even malarial protozoa. It’s even been shown to inhibit the Gram-positive bacteria Staphylococcus aureus and Streptococcus mutans.[vi]

Hop bract polyphenols (HBP) significantly reduced plaque in volunteers who refrained from all oral hygiene for three days except for rinsing with a HBP mouthrinse.[viii]

Hops extracts have been found to significantly reduce both nasal rubbing and sneezing in allergic mice, which suggests they may be effective in the relief of allergy symptoms.[ix]

Aside from beer production, hops are most widely known for their sedative effects (and it’s said that hops-filled pillows were once used to help people fall asleep).[xi] Ingesting the hops may be even more effective, though.

According to one study, the resin of hop increases the activity of gamma-aminobutyric acid (GABA), a neurotransmitter known for its inhibitory effect on nerves, essentially helping them to calm down.[xii] Those researchers reported:

“The concentration of 2 mg of hop extract effectively decreased nocturnal activity in the circadian activity rhythm. On the basis of this investigation, administration of non-alcoholic beer would be recommended due to its hop content and consequent sedative action, which would be an aid to nocturnal sleep.”

A separate meta-analysis found that 12 studies reported valerian on its own or in combination with hops improved sleep quality and lessened the amount of time it takes to fall asleep.[xiii]

If you want to take advantage of hops’ natural sleep-inducing effects, try Sleepzyme. With 60 mg of hops flower in every dose, plus 9 other natural ingredients to help you sleep, you’ll be nodding off before you know it.