Discover Why… and the 2-Step Solution to Prevent It!

When you think of back pain, you probably don’t think of Alzheimer’s. But there’s growing evidence that back pain can lead to Alzheimer’s and other forms of dementia.

If you suffer from back pain, please take the time to learn this connection below in order to avoid it (and please share this with others who experience back pain, too!)

The back pain and Alzheimer’s connection first came to light when it was seen that many back pain sufferers also complained of memory loss. And one woman’s story serves as a good example of why this strong connection may exist… 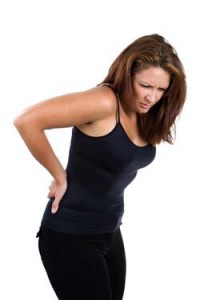 This woman suffered chronic hip and low back pain for years. The cause was diagnosed as degenerative lumbar spondylolisthesis (a common lower back condition, and a fancy word for a slipped disk where one vertebra slips forward over the one below it… but as you’ll see, the Alzheimer’s connection can exist with ALL kinds of back pain).

She did all she knew of at the time to correct the problem, but she never fully fixed her back injury. As a result, her body was in a constant state of trying to heal…

Now, the body’s response to injury is to product inflammation around it. This inflammation allows the body to heal most injuries, and it also works at ridding the body of foreign matter like bacteria, fungi, viruses, and toxins.

In other words, occasional and short-term inflammation like this is good for you and is a normal part of the healing process…

When an injury doesn’t fully heal, the inflammation does NOT go away. This is where the trouble begins for your brain and other parts of your body.

You see, in addition to being painful, inflammation has a dangerous down side: if it becomes chronic, it becomes destructive…

It can destroy cells, tissues, muscles, bones, and organs… including your brain! Even worse, the problem grows silently for years without any signals that it’s happening.

And that’s what happened to the woman. She suffered with back pain for so long,  the inflammation became destructive. For years, her chronic pain produced inflammatory chemicals that destroyed her tissues. And her brain paid the price.

She began to exhibit sun-downers symptoms, which eventually led to full-blown Alzheimer’s.

Your Doctor Does NOT Know This…

Unfortunately, most doctors don’t yet know of this connection. They treat both the back pain and memory loss separately. The patient ends up taking drugs that treat the symptoms, but that do not treat the underlying inflammation.

If the doctor does treat the inflammation, it’s usually with other drugs like acetaminophen.


The research shows very clearly that reducing inflammation does indeed reduce back pain and Alzheimer’s symptoms. That’s why the initial use of pain drugs helps at first…

BUT… the longer you take the drugs, the more damage they cause to your tissues. You may have heard about acetaminophen damaging your liver. Well, it damages MORE than just your liver. It damages soft tissue throughout your body… including your brain tissue.

So the real answer to both back pain and Alzheimer’s is to reduce inflammation in your body without causing injury to your tissues. And this is much easier than you might think…

1) Adjust Your Diet.  Because some foods reduce inflammation while others promote it, it’s important to eat the foods that reduce it and cut out the foods that cause it. Be sure to read The Top 10 Foods that FIGHT Inflammation.

2) Take the Right Anti-Inflammatory Nutrients. You need to reduce and eliminate whatever chronic inflammation you have as quickly as possible to ease back pain and prevent Alzheimer’s. You can do so by taking the right anti-inflammatory nutrients.

First, because there are many nutrients claiming they are “anti-inflammatory” on the market… BE CAREFUL! Aside from issues of quality, only a handful of nutrients provide powerful inflammation control to bring fast… and lasting… relief. 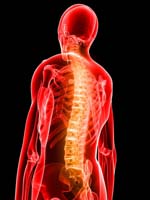 Proteolytic enzymes are one of the most powerful ways to fight inflammation!

One of the most powerful is turmeric. It contains curcumin, which stops inflammation by blocking COX-2. This is the same mechanism many pain drugs use. Because they work the same way, research has shown that turmeric is just as effective as the pain drugs — but it does NOT have any of the side effects!

That means it can control inflammation, ease your back pain, and prevent Alzheimer’s — and it will never make the disease worse or harm your tissues. There are literally hundreds of studies showing turmeric is a highly effective treatment for Alzheimer’s and other inflammatory diseases.

Another powerful anti-inflammatory are proteolytic enzymes. Like turmeric, these enzymes fight inflammation without any side effects.

How You Can SUPERCHARGE These Powerful Inflammation-Fighters

While turmeric and proteolytic enzymes are the star players in fighting inflammation, you can supercharge both of them by taking them with other anti-inflammatory nutrients.

These include ginger, bromelain, papain, devil’s claw, vitamin E, rutin, Mojave yucca, and l-glutathione. All of these have special functions in fighting inflammation. Taken together, they give you a multi-faceted attack on inflammation that can spare you from pain, memory loss, and many other conditions.

And the BEST NEWS is you don’t have to go buy all of these different supplements and take 10 different pills at a time, because they’re now available in one special formula designed to be the best way to fight chronic inflammation…

It’s called Heal-n-Soothe, and this proprietary formula has already helped thousands of people stop inflammation and pain… and potentially prevent memory loss and Alzheimer’s in the process!

The mix of the most powerful anti-inflammation nutrients in Heal N Soothe can work wonders … just ask Angela Jaggs, who wrote:

“All I can say is a big WOW and thank you. I have only been taking them for 4 or 5 days, but have noticed a huge difference. I stopped taking my strong painkillers, Co Codemal (the strongest) and Dihydrocodine, which I was taking every day and the full limit allowed in a day. I feel ‘almost’ normal again.”

Discover more about Heal N Soothe — including more about proteolytic enzymes and the 12 most powerful anti-inflammation nutrients — because as you’ll see, this proven formula really can help you fight inflammation, avoid dangerous drugs, stop pain… and quite possibly help you avoid Alzheimer’s in the process!

1 thought on “WARNING: Back Pain May Lead to Alzheimer's”