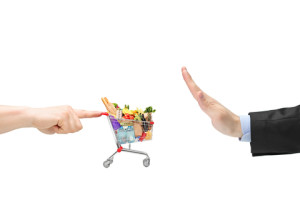 If you want to avoid genetically modified organisms (GMOs) in your food and you eat processed foods, you’d better get ready to purge your pantry. It’s estimated that at least 75 percent of processed foods, from crackers to soda, contain GM ingredients.[i]

This is largely because 93 percent of U.S. corn and 94 percent of U.S. soy are genetically modified, and corn and soy are featured predominantly in most processed foods. However, there are some less obvious GM ingredients as well, like cottonseed oil (96 percent of U.S. cotton is GM) and – a surprise to many – sugar.[ii]

Up to 60 percent of U.S. sugar comes from sugar beets, the majority of which are genetically modified.[iii] So avoiding GM foods is at once simple and overwhelming, depending on your current diet. If you currently eat a mostly fresh-foods diet, it’ll be easy for you to stay away from GMOs. If your diet is focused on processed foods, you’ve got some cleaning up to do (or at least some swapping of organics for your regular brands, as organics are GMO-free).

If you’re new to the GMO debate, you may be wondering why to go to the trouble of removing them from your diet. You’re already eating them, why stop? There are a number of concerns surrounding the toxicity of GM foods themselves as well as the pesticides, like Monsanto’s Roundup, that accompany them.

There’s a reason why 26 countries have banned GMOs.[iv] In a nutshell:[v]

Further, one of the most pressing issues is the widespread use of Roundup on GM crops. Earlier this year, the International Agency for Research on Cancer (IARC) declared Roundup’s active ingredient, glyphosate, a “probable carcinogen” (Class 2A),[vii] which means eating GM foods contaminated with it could potentially be also.

Glyphosate residues are known to exist widely on GM foods, yet the U.S. Department of Agriculture (USDA) does not test for such residues in your food, claiming the tests are “too expensive” to do on a regular basis.[viii]

And cancer is just one of the concerning aspects of glyphosate. It’s also been show to interfere with metabolic processes, disrupt the endocrine system, alter the balance of gut bacteria and more. Quite simply, consuming GM foods truly is an ongoing experiment that is being hoisted upon the American public, much of whom are unaware that they’re acting as human guinea pigs …

If you want to opt out, it’s still possible, but since GM foods aren’t required to be labeled (another reason to avoid them – it’s a matter of your right to know what’s in your food!) you have to be smart about it.

10 Foods to Ditch if You Want to Avoid GMOs

Daily Finance compiled 10 common foods you’ll need to give up if you want to avoid GMOs.[ix] It’s a good starting point but, as mentioned, you’ll need to ditch most processed foods to really avoid them.

If you’re interested, the Center for Food Safety has created the True Food Shoppers Guide for avoiding GMOs in your food. You can download the app so you can avoid GMOs whenever you shop. Also, choose organic as much as possible, as organic foods are GMO-free.

Take a look at the ingredients and you’ll find many canned soups contain high fructose corn syrup (HFCS) and vegetable oil (possibly soybean oil) along with other soy-based ingredients.

Try to find a conventional frozen food that doesn’t contain sugar, HFCS or soy … go ahead, I dare you (and frozen vegetables don’t count!).

Sadly, even infant formula often contains GM soy and milk-based ingredients. The milk is a problem because conventional dairy cows are fed GM corn for feed, which means even the most vulnerable among us are being inundated with GMOs.

Most grains (other than corn ) are not GM, but again the GMOs come in for the added sugar and, often, corn, that many cereals contain. Last year cereal giant General Mills actually announced that its original-flavor Cheerios would soon be GMO-free (they formerly contained GMO cornstarch and sugar). The boxes will reportedly be labeled “Not Made with Genetically Modified Ingredients.”

Corn, soy and cottonseed crops – the majority of which are GM – are popular plants for making vegetable oil. Rapeseed, from which canola oil is made, is also likely to be GM, as 90 percent of such crops in the US are genetically modified.

This “health food” may come as a surprise on the list, but tofu is made from soy and, often, GM soy at that.

While livestock has yet to be genetically modified, most factory-farm raised animals are fed GM corn and/or soy. In this way, you’re still being exposed to GMOs when you eat the meat. This is one more reason to seek out grass-fed, pastured animal foods whenever possible. (While livestock have yet to be genetically engineered, be aware that the U.S. Food and Drug Administration (FDA) is considering approval of AquAdvantage genetically modified salmon, which may soon be coming to a store near you.)

As with meat, dairy cows are typically raised on GM corn, which means you’re being exposed when you drink the milk. If you drink milk, organic, grass-fed milk is a GM-free alternative.

If you drink soda you’re also drinking a hefty dose of GM sugar and/or HFCS. Of course, GMOs are just one reason to ditch soft drinks …

The Healthy Back Institute is GMO-Free

The Healthy Back Institute believes in the power of nature, and using products in as close to their natural state as possible for ultimate health and healing. This is why HBI never uses GMOs in any of our products, including the #1 best-selling pain relief supplement from Heal-n-Soothe. With every product GMO-free, you can feel confident in choosing them to support and protect your health.

[i] Center for Food Safety, About Genetically Engineered Foods