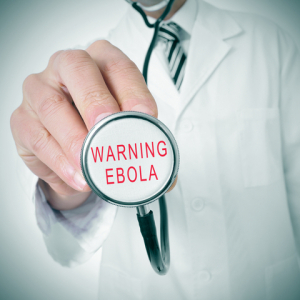 New York doctor Craig Spencer is the latest person to be diagnosed with Ebola in the United States. As a physician working with Doctors Without Borders, he had recently returned to the US after treating patients in Guinea, Africa, which is one of the three hardest-hit countries with Ebola.

After returning home, the doctor traveled on the subway, rode in a taxi and visited a public bowling alley … before discovering he had a fever and seeking medical care. The case marks the fourth case of Ebola diagnosed in the United States, and each has prompted quarantines among close contacts.

Clearly, Ebola is contagious – so much so that even two nurses wearing protective gear were infected while caring for Ebola patient “zero” (the first laboratory-confirmed case of Ebola to be diagnosed in the United States). But they were in direct contact with contagious bodily fluids …

What many are wondering is … how worried do you need to be? Can you pick up Ebola by riding in a taxi or picking up a bowling ball? Can you get infected by going to the hospitals where previous Ebola patients have been treated? And what about if you end up sitting next to an ill person on a plane … should you be concerned?

Here I want to help set the record straight about Ebola … including the best way to truly avoid getting it. But first it helps to understand what exactly Ebola is …

What is Ebola? Why is it So Deadly?

There are five known Ebola virus species, four of which can cause disease in humans (the fifth can cause disease in nonhuman primates). It’s thought that the virus was originally introduced to humans from contact with a wild animal carrier – such as a fruit bat, monkey, forest antelope, porcupine, chimpanzee or gorilla.[i]

The virus , which has at least a 50 percent mortality rate (an in some cases 90 percent), is so dangerous because it attacks virtually all of your organs and tissues while also dampening your immune response. It causes bleeding, organ failure and damage to blood vessels and connective tissue. Characteristic symptoms, which may develop after several days of being ill with fever, sore throat, fatigue, muscle pain and headache include:[ii]

As explained by the Washington Post:[iii]

Proteins released by immune cells create widespread inflammation, which can damage the tissue lining blood vessels, causing them to leak. When immune cells known as macrophages are attacked by Ebola, they release proteins that cause coagulation in the bloodstream, blocking blood flow to organs such as the liver, brain and kidneys. Red blood cells break apart when moving through small vessels filled with clots. The spleen becomes overwhelmed with broken blood vessels.

As cells in the liver are destroyed, the blood loses its normal ability to clot, exacerbating any internal or external hemorrhaging … Ebola damages many kinds of tissue in the body, either by the virus infecting cells or by the body’s extreme inflammatory response.

Ebola is spread via bodily fluids – vomit, diarrhea, blood, sweat, semen, etc. The virus is killed by heat and requires a moist environment to survive (so dried bodily fluids aren’t likely to be infectious). Further, it’s thought that it’s only possible to transmit Ebola after you begin to experience symptoms; prior to that, levels of the virus are thought to be too low to pose a risk to others.

Taken together, this means that in order to be infected with Ebola you’d need to have direct contact with an ill (symptomatic) person’s bodily fluids (and then transmit them to your body by touching your eyes, nose, mouth, etc.). Simply being in the same city with an isolated Ebola patient is therefore not a concern … and even if you were to come across someone in a public place who later turns out to be infected, your risk of getting sick is still extremely low, unless, of course, the person was vomiting and you touched the vomit and/or were in close proximity to it (in which it would be possible to inhale airborne particles of the fluid).

As of October 23, there were 10,141 Ebola cases worldwide, including 4,922 deaths.[iv] In the United States, there have only been four cases. A major outbreak in America is extremely unlikely, and it’s important to keep that in perspective. That being said, the World Health Organization (WHO) has warned that the Ebola crisis in West Africa is “vastly underestimated,” and expects the outbreak to “continue for some time.”[v]

With international travel occurring daily, it’s true, at least theoretically, that an Ebola outbreak on U.S. soil is only a plane trip away. I’m not trying to spread fear … remember that the United States is far better equipped to contain and treat Ebola cases as they arise than West Africa, and due to the close contact needed for transmission, widespread Ebola illness is highly unlikely.

Still, the risk is out there, so it’s far better to be prepared in any way you can …

How to Avoid Getting Ebola

The steps to avoid getting Ebola are the same as they are for many other infectious diseases, including:

Primarily, however, the key to avoiding infectious diseases of all kinds is to build your immune system so it is capable of defeating invading pathogens. Leading a healthy lifestyle is the best way to do this:

Beyond this, consider replenishing your body’s supply of natural systemic proteolytic enzymes. You see, while viruses can be difficult to kill (some more so than others), they’re not invincible. For instance, ultraviolet radiation is one of the most potent viral killers, as it breaks the virus’ capsid, which means it can’t inject its genetic material into your cells (UV radiation also destroys virus’ genome). Chlorine works to kill viruses in a similar fashion.[vi]

Among the many talents of proteolytic enzymes in your body is the ability to “eat up” the protective coating on a virus. They also significantly stimulate your immune system, helping it to further rid your body of viruses, for an effective two-pronged virus-busting attack. “The Complete Book of Enzyme Therapy” explains:[vii]

Proteolytic enzymes are naturally produced in your pancreas, but your natural production declines with age; these inflammation-busters become largely depleted as you hit 40 and over. If you want to supplement your body’s supply, Heal-n-Soothe provides a significant dose of a powerful proteolytic enzyme blend.

[vii] The Complete Book of Enzyme Therapy, by Anthony Cichoke