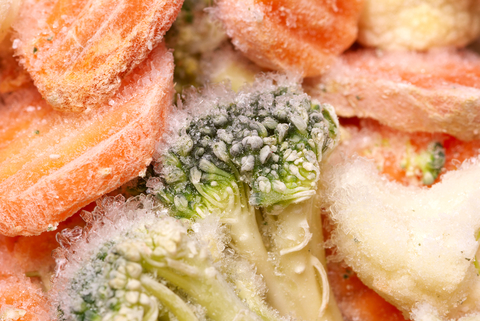 Do you ever feel slightly guilty when resorting to frozen veggies over fresh? On the one hand you’re eating vegetables … on the other, they’re frozen, not fresh. Well, such veggie guilt may be all for naught, as new research shows that not only are many frozen veggies just as good as fresh … they may even be healthier!

The problem with fresh produce is that it often sits in storage prior to reaching the supermarket, sometimes for up to a month. Then, it sits even longer in your refrigerator once you get it home. But with each passing day, valuable nutrients are slowly being lost. Frozen vegetables, on the other hand, are often frozen nearly immediately after harvest, preserving more of the vitamins and antioxidants.

In fact, two independent studies revealed that when compared to their fresh counterparts:[i]

45 Percent of Nutrients in Fresh Veggies May be Lost

This isn’t the first time frozen veggies have trumped fresh. Research from 2010 also showed that fresh vegetables such as green beans may lose up to 45 percent of nutrients by the time they’re purchased.[ii] Others, like broccoli and cauliflower, lost 25 percent of their nutrients after 16 days, which is a common ‘age’ for supermarket produce.

The implication is that it may be healthier to stick with frozen foods at the supermarket. That said, if you’re purchasing your veggies fresh from a farmer’s market or farm, where the storage time is minimal, or growing them in your own garden, then fresh really means fresh — and is probably still the best choice.

How Do Canned Veggies Stack Up?

Contrary to popular belief, canned veggies, too, can be just as nutritious as fresh or frozen. According to a report in PLOS One:[iii]

Likewise, according to research published in The Journal of the Science of Food and Agriculture:[iv]

The problem with canned veggies is that can linings often contain bisphenol-A (BPA), an endocrine-disrupting chemical linked to heart disease, insulin resistance and reproductive problems. From this standpoint alone, you’re better off choosing frozen or fresh veggies instead … not to mention that some canned vegetables also contain added salt.

Vegetables are some of the most detoxifying foods around, helping your liver to detoxify wastes and providing your body with antioxidants that help fight off the free radicals that environmental chemicals produce. So no matter in what form … frozen or fresh … including more of them in your diet is a smart, smart move.

And while you’re at it, you can further help to flush impacted fecal matter and other toxins from your system by choosing a gentle detoxification system like Natural Cleanse. Some of us are carrying around 20 pounds or more of hardened fecal matter in our intestines right now … and all the veggies in the world may not be enough to get it out. But, in just 2 capsules daily for 30 days, Natural Cleanse can help to flush your colon clear of this toxic build up.

2 thoughts on “Are Frozen Vegetables Healthy?”