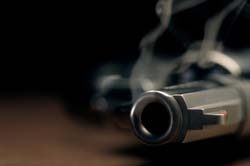 Are antidepressants the real smoking gun in school shootings?

Ever since the horrific school shooting at the Sandy Hook Elementary School in Newtown, CT, debate has raged on both sides of the gun control issue about the failure to protect our children.

Other proposals range from addressing violence in video games to arming teachers in schools.

But is it all one giant red herring? A deliberate attempt to create so much noise around the issue of gun control that no one notices the real danger?

A danger that, if confronted, may tear down many arguments used in the current gun control debate – and threaten major players with deep pockets in the pharmaceutical industry. Players who hold significant influence over politicians in Washington. Players with much to lose.

Are We Missing the Point?

The dangerous issue I’m talking about was raised recently by someone with a close connection to the gun industry, John Noveske, founder of Noveske Rifleworks.

On December 27th, John posted a list of over two dozen violent episodes committed by individuals who were on or recently stopped taking antidepressants, especially Selective Serotonin Reuptake Inhibitors (SSRI) antidepressants, on his company’s Facebook page.

It was a list an unnamed friend had forwarded to him. At the end of the list he added a few more names, including this final question, “What drugs was Adam Peter Lanza on, age 20, Killed 26 and wounded 2 in Newtown Ct.”

John died alone eight days later in a single vehicle car accident so we may never know his source. 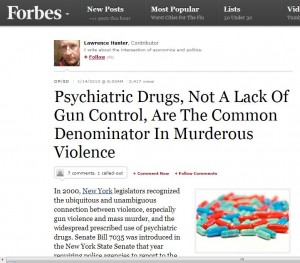 Last week, Forbes.com published an Op/Ed article on their website titled “Psychiatric Drugs, Not A Lack Of Gun Control, Are The Common Denominator In Murderous Violence.” In his article, respected regular contributor Lawrence Hunter brought up some interesting facts.

Like the preamble to a bill introduced in the New York State Senate in 2000 that recognized the scientifically established connection between psychotropic drugs and violent behavior. That bill got buried in committee.

He also pointed to statistics published by the Citizens Commission on Human Rights International (CCHR) about dozens of school shootings over the past 15 years that were committed in virtually every case by shooters who were either on or in withdrawal from psychiatric drugs:

Notably missing from this list are Seung-Hui Cho, who killed 32 at Virginia Tech in 2007, and Adam Lanza, perpetrator of last month’s tragic shooting at Sandy Hook Elementary.

We still don’t know if these shooters from the most notorious school shootings of the past several years were on or in withdrawal from antidepressant or other psychiatric drugs. For whatever reason, the shooters’ medical case records have been carefully guarded even though both are now deceased.

(We do know that Aurora, CO theater shooter James Holmes was ‘under the care’ of a psychiatrist before his shooting rampage. Meaning in today’s parlance he was probably on one or more psychiatric drugs, too. But this can’t be confirmed as his records also appear to have been ‘sealed.’)

Even the FDA Recognizes a Problem

Mr. Hunter also quoted statistics of 12,755 reports to the FDA’s MedWatch system of violent side effects from psychiatric drugs between 2004 and 2011. These side effect reports included 1,231 cases of homicidal ideation/homicide, 2,795 cases of mania and 7,250 cases of aggression.

He went on to remind us that the FDA itself admits that only between one to ten percent of all side effects are ever reported to their system. Meaning there were likely at least 127,000 incidents – that’s over 15,000 incidents per year in their most optimistic scenario.

As you can imagine, Mr. Hunter’s credible article took the Internet by storm soon after publication early Monday morning, January 14th. The link was rapidly shared around the world. News was getting out.

Until a few hours later, when anyone attempting to read his article got this instead: 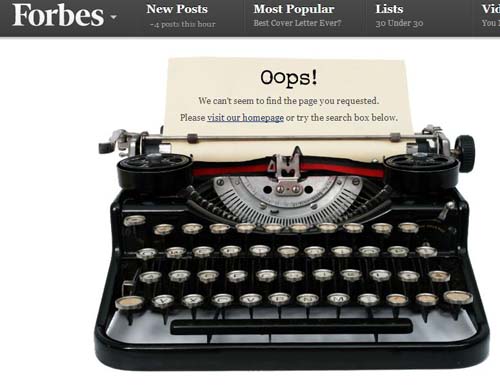 Are murders linked to antidepressant drugs?

After John Noveske’s untimely death I started digging for the truth. And since Mr. Hunter’s article suddenly disappeared last week I’ve been digging even harder. And what I’ve shared above is just a small part of what I’ve discovered so far.

One site I ran across lists over 4,800 documented news stories of mostly criminal violent acts committed by people on or withdrawing from SSRI antidepressants like Prozac, Zoloft and Cymbalta.

I know many people believe antidepressants help. So many believe they help that more than 1 in 10 Americans over age 12 now take at least one according to CNN. We’re talking a 400% increase since the late 1980s.

Which leads me to ask, are antidepressants and other psychiatric drugs responsible for violent – even murderous – rampages? Or is the uptick in violent episodes across our country in recent decades simply an unrelated fluke?

Do YOU think there is an antidepressant drug – murder connection?

Is there a connection between antidepressant drugs and violence? What does the evidence tell you?

Tell me in the comments below.

Do you or a loved one take an antidepressant? Have you taken one and stopped? Has a tendency or sudden urge for violence ever occurred since taking them?

I’d really like to hear about it below… let’s get to the bottom of this together.

If you are currently on any form of antidepressant, PLEASE work with your medical provider before and while attempting to wean yourself from the drug. Many side effects (besides violence) are associated with antidepressant withdrawal.

If you haven’t started taking antidepressants yet but are looking for natural alternatives, some effective supplements to consider include Omega-3s, SAMe (S-Adenosylmethionine), Valerian and St. John’s Wort.


3 thoughts on “Antidepressants: Driven to Kill?”