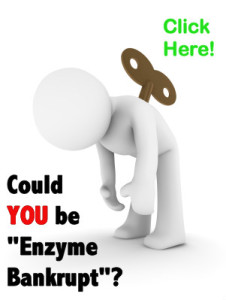 We will be publishing the top 5 secrets, each in their own devoted article. Today we reveal secret #1 … enzymes. Enzymes are found in every cell in your body where they help your body carry out thousands of biological functions. At the most basic level, enzymes speed up processes in your body that would otherwise occur too slowly to keep you alive.

At a much deeper level, enzymes are involved in a mind-boggling number of bodily activities, from producing energy and breaking down food to helping you fight infections, reduce inflammation and rid your body of toxic wastes.

When most people think of enzymes, they typically are thinking of digestive enzymes, which convert the food you eat into small molecules that your body uses as fuel. But enzymes actually do so much more. Other enzymes, such as maltase and lactase, help to convert certain sugars into glucose while an enzyme known as renin helps you to digest proteins specifically found in milk.

There are also metabolic enzymes, which exist inside your cells, where they work to keep your cells, tissues and organs functioning. Metabolic enzymes are involved in such important biological processes as keeping your heart beating, building bones and healing wounds – and some believe a deficit in such enzymes is a root cause of aging itself.

Does Your “Enzyme Potential” Dictate Your Lifespan?

Dr. Edward Howell, one of the pioneers of enzyme research, in particular believed that you are born with a limited supply of enzyme energy, and if you don’t consume enough enzymes via your diet (in raw foods, for instance), your digestive system will become stressed and unable to properly break down your food.

This could lead to a reduced availability of metabolic enzymes (which are ‘used up’ to support digestion), which he believed was at the root of most chronic health problems.[i] According to Dr. Howell, you life expectancy is only as good as your “enzyme potential.”[ii]

Many signs and symptoms that we attribute to aging can also be signs of enzyme deficiency. If you have blood-clotting disorders, chronic fatigue, high cholesterol, obesity or other chronic health ailments or even grey hair, these could be signs that you’re already enzyme deficient. Naturopathic physician Keith Post explained:[iii]

“At birth, we have an abundance of enzymes. However, researchers have discovered that somewhere between the ages of 27 and 35, our body begins to conserve the remaining enzymes in order to make them last as long as possible. So, this is the time of life when many of us begin to develop various aches and pains, which we often blame on old injuries. The truth, however, is that our repair mechanisms are not what they once were. A lack of a continued abundance of systemic enzymes is probably one of the main reasons behind the aging process.”

What are Systemic Enzymes?

The more widely known digestive enzymes are very useful, especially if you suffer from regular gas, bloating, abdominal pain, heartburn or other signs of trouble with digestion. However, they do not survive well in your stomach acid (although giving them an enteric coating can help), so after being used for digestion they will provide little other benefit.

Systemic enzymes, on the other hand, are designed to survive your stomach acid, allowing them to enter your small intestine and be absorbed into your bloodstream[iv] — and that’s where the real ‘magic’ happens. As reported by Michael Sellar, editor of Enzyme Digest:[v]

“Systemic enzyme therapy (SET) refers to enzymes taken by mouth on an empty stomach, which, after absorption, flow throughout the body to wherever they are needed. These make up the metabolic shortfall directly. The most important enzymes for the purpose of SET are the hydrolases, which are mainly proteolytic enzymes, since they have such a wide range of activity in the body.”

“The histological, radiological, biochemical (chromatographical, enzymological), immunological and biological methods have convincingly proven that a part of swallowed enzymes may pass the intestinal barrier in an undamaged macromolecular form and realize their activities in the body.

… The absorbed enzymes are rapidly complexed with naturally occurring blood antiproteases. In these complexes the potential immunogenicity of enzymes is restricted and they are concentrated into pathologically affected areas of the body. Complexes in addition display important immunoregulatory activities.”

In your body, systemic enzymes are known for fighting inflammation and stimulating your immune system, both crucial for fighting the signs of aging.[vii]

Why Don’t You Have Enough Enzymes?

For starters, enzymes in your food become inactive with heat, which means if you eat most of your food cooked, the enzymes have already been destroyed. In addition, proteolytic enzymes are naturally produced in your pancreas, but your natural production declines with age.[viii]

Hydrochloric acid in your stomach is also reduced with age, and this is another variable, as hydrochloric acid plays a role in activating enzymes. So what can you do? It’s important to include raw foods in your diet to help replenish some of your body’s enzyme stores naturally, however for anti-aging effects you’re going to want Heal-n-Soothe, the best systemic enzyme formula to replenish your body’s supply of vital enzymes (now with double the enzymes).

Note: Systemic enzymes must be consumed on an empty stomach (if you take them with food, your body may use them for digestion before they have a chance to enter your bloodstream for systemic effects).[ix]

1 thought on “5 Most Powerful but Little-Known Anti-Aging Secrets: #1”