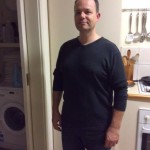 After injuring myself over-training for a marathon as a seventeen year old I ended up severely damaging nearly every ligament from my hips down. The doctors said to not run again for at least two years. However, the injuries never properly healed and I suffered constant but manageable pain. A few years later I started having back pain and five years ago I had an x-ray of my back done and what it revealed was a back twisted like a pretzel.  By this time I was eating eight Mersyndol each night just to get two-hours sleep. I started receiving treatment with a chiropractor, which made a big difference. Most days I would feel only low-level pain and experience severe pain a couple days before my regular fortnightly appointment, but I couldn't sit for long periods. On plane trips between Perth and Melbourne I would spend most of the flight standing in the aisle. Since starting to use Heal-n-Soothe, Rub on Relief, Lose the Back System, 7-Day Back Pain Cure Book and the Freedom Back the pain stopped. Within a couple days it reduced significantly, and a couple of weeks later it was just gone. A month later I flew to Guangzhou from Perth and sat in an economy class seat for eight hours comfortably. Even on the flight back with an injured shoulder I slept soundly. These days my chiropractor is astounded by the change, and the careless ease with which I move around. I no longer have to be careful to avoid pain. It has now been six weeks since my last chiropractic appointment and I still feel great.   Dale Hartley in Joondanna WA, Austrialia
By: Dale Hartley