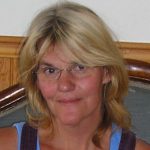 "I have experienced some level of back pain for two decades. From time to time, I've had terrible and constant back spasms lasting as long as two weeks. In February 2020, my back pain was so severe that I literally could not move. I was bedridden for three weeks, unable to find a comfortable position. Really, I wanted to die.  After being on major painkillers and anti-inflammatory medication, I was able to get an X-ray (which revealed spinal curvature and disk deterioration) and see a chiropractor. Although my pain receded somewhat after several adjustments, I was still very uncomfortable. I went online and discovered Emily Lark and immediately started doing her suggested chair exercises. Emily turned me on to the Healthy Back Institute and I decided to try Heal-n-Soothe. Six tablets a day were suggested and I was told to give the product a few weeks to work. I felt much better after several weeks and now six months later, I'm free of pain. Not only is my back pain gone, but the soreness I sometimes felt in my shoulders is also a thing of the past. I can now do gardening, tending to my horses and house cleaning. Heal-n-Soothe has worked miracles for me. I haven't had to take pain medication in months and I feel thirty years younger. Crispin Littlehales, CA"
By: Crispin Littlehales, CA